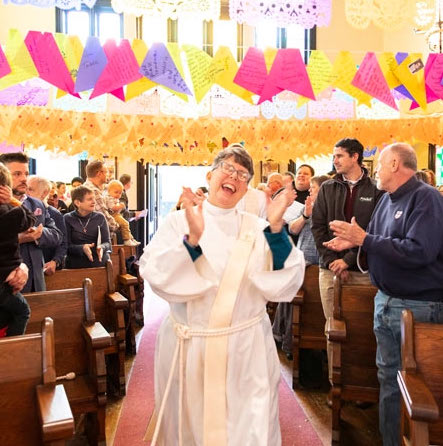 Courtney is honored and excited to serve as Associate Rector at All Saints.  Courtney  is a long time member of All Saints having walked in the doors in January 1996 and immediately finding herself welcomed and engaged.  Courtney is a 1990 graduate of Yale Divinity School and served as Catholic Campus Minister at Aurora University before finding her way to the Episcopal church.  For more than 15 years, Courtney worked in non-profit leadership and administration in HIV and LGBTQ service organizations around Chicago before being called to the Diocese of Chicago as Director of Operations in 2011.  Her ministry in the diocese reawakened a call to ordained ministry, and Courtney was sponsored for ordination by the All Saints Community in 2018 and ordained a priest in January 2020.

Courtney finds God most especially in and around our glorious lakefront where she and her two dogs can be found in the early mornings almost 365 days a year.  She desires to help others find the places where they connect to the Holy most deeply.

She and her wife of nearly 20 years, Pam Palmentera, have three teenage daughters, and you can often find Pam and Courtney cheering them on at water polo matches and swim meets.  Pam works as a social worker at Northwestern and in her free time find her joy in the cockpit of a kayak paddling with and coaching others who share her love of the water.

Courtney is thrilled to begin her ordained ministry at All Saints and can’t wait to see what continues to unfold for this amazing community of faith.